Guitar | Circle of Fifths: 16 Applicable Ways You Can Use Right Now (Part 1 of 2) 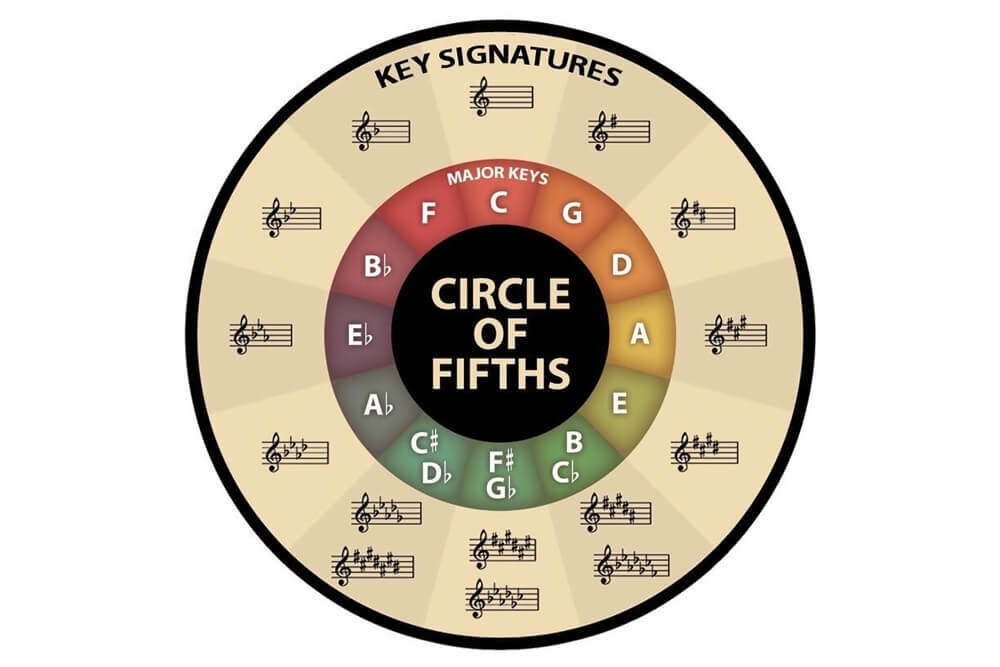 The Circle of Fifths can help you quickly access information such as what are the notes and chords in a specific key, where are the sharps and flats, as well as transposing between keys with ease.

In this 2 part series article, you’ll learn about the 16 ways in which you can put the Circle of Fifths to use.

The Circle of Fifths can help you determine the chords that are contained within a specific key by looking at the ‘grouping of six’ surrounding the specific key.

Using C major as an example, to find its group of six, use C major as the center. Together with the 5 keys surrounding it, you’ll get the six chords within the C major key (C major, F major, G major, A minor, D minor, and E minor).

Likewise, if you want to figure out the chords in the F#m key, use F#m as the center, and together with the 5 keys surrounding it, you’ll get the six chords that are within the F#m key (F#m, Bm, C#m, A, D, E).

To find the notes in each key, you need to understand something called the ‘Enharmonic Equivalent’, which is a note that is equivalent to another note, but in a different name.

So looking at the diagram, using A major as an example, the formula for identifying the notes is to take the first note in the counter-clockwise direction of A, and the subsequent 5 notes in the clockwise direction.

If you’re wondering at this point why are the notes called sharps in some instances and flats in others, the Circle of Fifths chart comes in useful again.

In middle, you have the key of C major and A minor at the top, and the key of G flat and F# at the bottom.

Notes in the key of C major and A minor do not contain any flats or sharps, hence their notes will always be A, B, C, D, E, F, and G.

Notes in the key of G flat and F# however, each can contain 6 flats or 6 sharps. Depending on what key they’re in, a flat or sharp note will be used in accordance to the enharmonic equivalent.

You may have heard a lot about pentatonic scales and how they are the bedrock of improvisation and creation. In order to practice each of the major and minor pentatonic scales, you’ll need to know what the notes are.

By using the Circle of Fifths, you can easily find out what the notes are for each of the major and minor pentatonic scales.

Alternatively, you can also refer to the 7 notes of the C major key on the Circle of Fifths, and simply remove the first note (F) and last note (B) to get the 5 notes for the C major pentatonic scale.

The same method applies to finding the notes for the pentatonic scales. Simply start with the base note you want, and include the immediate 4 notes in the clockwise direction.

Let’s take the key of C major as an example, we have the chords C, G, F, Dm, Am, and Em. And assuming you’re going to play a common chord progression 1, 5, 6, 4. You can then use the Circle of Fifths to figure out which of the 6 chords are in what position and play the 1, 5, 6, 4 chord progression accordingly.

Likewise in example 2, if you’re playing the same chord progression 1, 5, 6, and 4 in the key of D major, the chords you’ll play in this progression will be D, A, Bm, and G.

Now if you have a guitar handy, go ahead and play the chord progression in the above examples, you will realize that they both sound the same, except in a different key. And this is exactly how you can transpose a piece of music from one key to another.

I hope the 6 applications above have shed some light on how easy and useful the Circle of Fifths can be when it comes to playing the guitar.

This is a 2 part series, be sure to come back for the second part where you’ll learn 10 more Circle of Fifths applications that you can put to use right away.