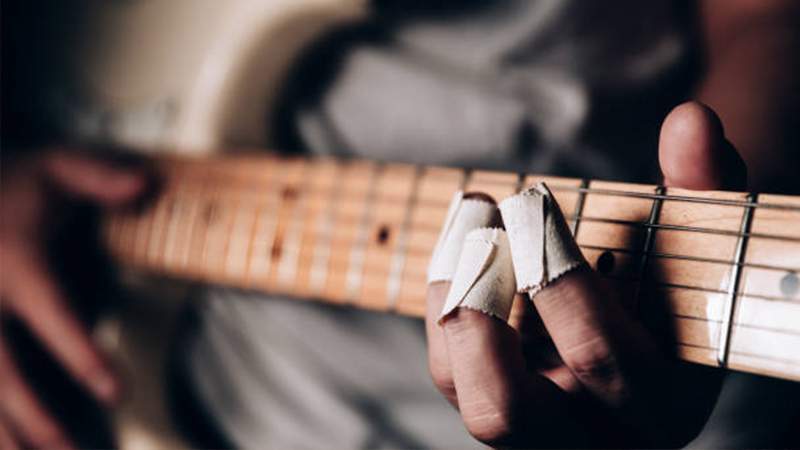 Let’s face it, we’ve all been there and experienced the frustration of not sounding a chord right, or missing a string or two when playing.

Today we shall look at 5 common challenges a beginner faces when learning the guitar, and how you can overcome them.

Changing chords can be a morale killer.

When you can’t do it properly, it’ll sound awful and you don’t feel like playing. Eventually you’ll stop practicing, sounds about right?

The key to changing your chords smoother is PRACTICE!

If you’re already practicing a bunch, then I say good job and keep it up.

Below are a few more tips that can help you end the frustration sooner.

1.1 Know each chord that you’re going to play in a sequence

For example, if you’re going to play G, D and C, you’ll obviously first need to know the shape of these chords. Then when you’re playing the G chord, in your mind you’re already preparing for the next chord (D chord) and visualizing the shape change.

Using G, D, and C as an example again, form the shape of a G chord, press down on the fret, feel the shape of the chord in your fingers, and move on to D chord, and C chord.

Repeat the process to allow your fingers to get used to the shapes and movement’s flow.

If you're playing G, C and D with the D chord being the problem, one way you can practice is to first hold the chord shape of the previous chord (in this case it’s G), then make the change into the chord you’re having problems with (in this it’s the D chord) and play it.

Repeat this process so your muscle memory of your fingers remembers the transition into the D chord (or the chord you're having problems with).

Every chord is made up of a group of notes, in which the root note is responsible for giving the chord its distinctive sound.

By focusing on the root note during chord changes, you can produce the sound of that chord better. As a side reward, you will also remember the root note of each chord.

1.5 Keep your chord fingers close to the fretboard

If you leave your fingers too high, you’ll easily lose track of your position on the fretboard and it becomes more difficult for your fingers to return to form the shapes of the chords you want.

Try not to rush your chord change. Take your time and be sure of each shape, really feel it before you move onto the next chord and increase your speed gradually when you're more comfortable.

If chord changing is the number morale killer, then pain in the fingertips would have to be number two.

Before I go on, I just want you to know that this pain that you’re experiencing in your fingertips is a sign of your hard work and dedication about to pay-off.

You’re almost over one of the toughest hurdles you’ll ever come across in guitar learning.

The good news is, once you’re over this hurdle, you’ll never have to experience the same pain again. Even if you come back to play after a long time, the pain won’t be as bad.

So how do you overcome the pain?

Many recommend that you slow down or stop practicing.

Ok, the truth is, it depends on what kind of pain it is. If it’s pain in the finger joints and muscle, then please give it some rest before you continue.

If it’s just the skin on the fingertips, then it’s perfectly alright to keep practicing, but with care.

By care I mean practice in shorter sessions, let your fingers get used to the pain. Even by holding down on a chord shape is practice enough, you don’t have to play it.

Hold the shape of the chord for a few seconds, you’ll feel the pain, then release your fingers.

This would also be the perfect time to practice your chord transition where you’re not playing the chords, just switching from one chord to the next. Or you could hold down on just one chord and practice your strumming or plucking.

The point here is not that I’m crazy but this is the stage where your body starts to react to the’ stress’ that it’s experiencing. And eventually your body (fingertips) will start to develop calluses to protect itself and Voila! No more pain.

This is a tricky one. The most direct answer is to keep PRACTICING!

It’s all about letting your fingers get familiar with the environment and knowing where they are at all times. The more you play, the more your hands/fingers get used to the position.

But if you really want a quick fix, I would say to use your thumb (placed it on the low ‘e’ or A string) as a reference point. 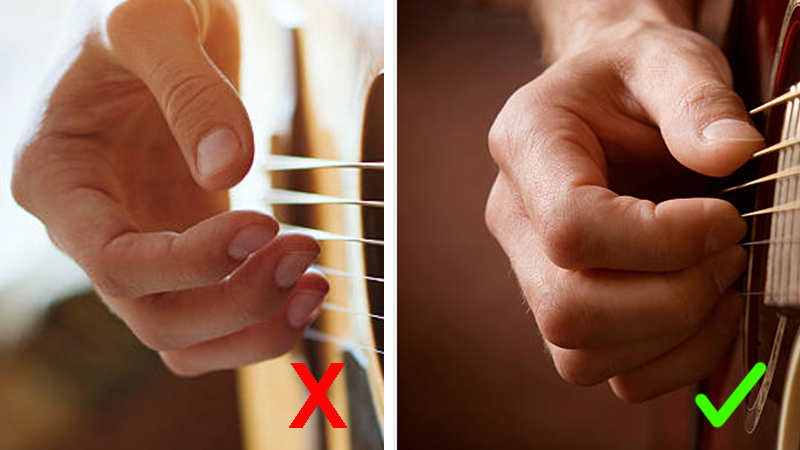 When your hand is suspended in the air, it can get lost easily without a proper reference to distance and space. But if you have your thumb rest on the low-e or A string, then your hand can more easily determine the positions of the other strings.

Ahhhh…. Yes !!! Barre chords, why did they even invent it?

The number one way to properly hold a barre chord is, yes… PRACTICE !

But a lot of the problem comes from a beginner’s misunderstanding of how a barre chord should be pressed down on a fret.

Did you know that your index finger, which forms the barre of the chord, should be slightly curved, and not straight (flat) on the fret? 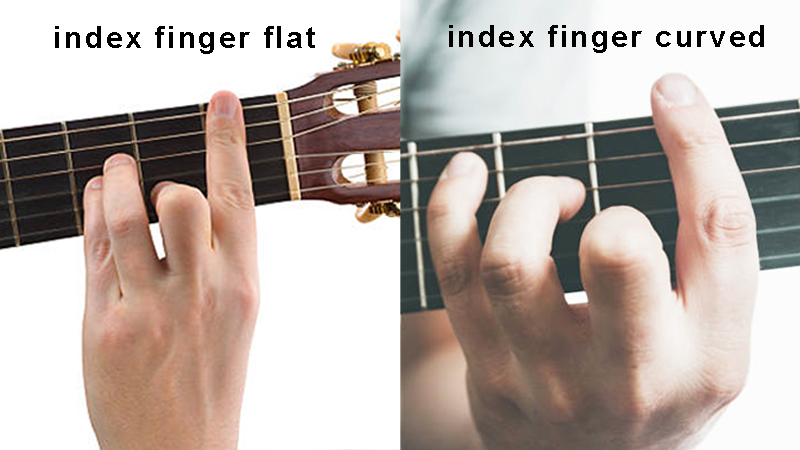 The first obvious reason for this is the fretboard itself is actually slightly curved (except for classical guitars, which fretboards are indeed flat, but they also have softer strings).

If your index finger is too flat, you’ll not have full contact with the fretboard.

The second reason is the composition of a barre chord do not require you to always have even pressure from your index finger.

You see, most of the barre chords, if not all, are comprised of the ‘Barre’ where your index finger go, the rest of the notes for your middle, ring and pinky fingers are almost always on the B,G,D, and A strings (#2, #3, #4, #5).

Your index finger really only has to press down firmly at its tip and base. The notes in the middle section are usually taken care of by the other fingers.

Give it a try.

You would think that you must have mastered the use of all your fingers, up until this point in time when you found out that your pinkies are absolutely useless.

We may not use our pinky as often as we would need to in life but when it comes to playing the guitar, they are absolutely essential.

With many chords relying on them, as well as techniques such as pull-offs and hammer-ons, which depends on using your pinky.

So how do we strengthen our pinky finger?

But try to be smart about it. Pick songs with chords that use the pinky. Personally I play my G chord with my pinky on the high E string.

Practicing scales can also be a great way to build up the muscles in your fingers.

I know playing the scales might be a little too early at this point, but these exercises are used to train your fingers, and not your musical knowledge.

Just for fun, give the Pentatonic Scale a try. 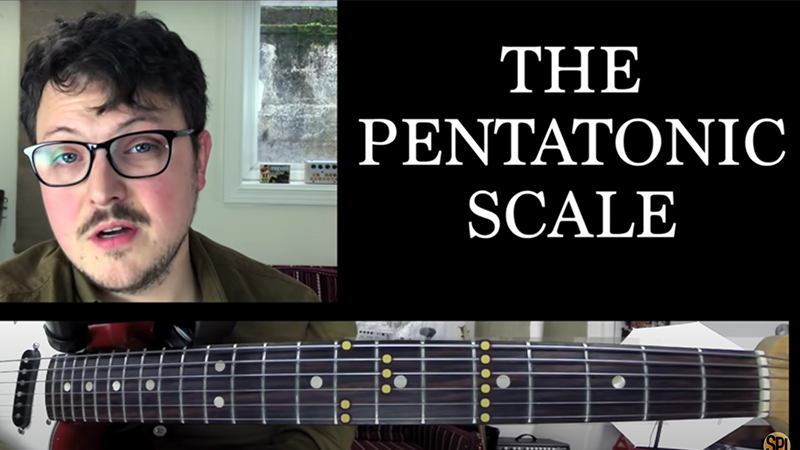 By using this scale:

– you learn to cover a space of 4 frets and give your fingers a good and easy stretch;

– you get practice finger placement in a systematic way;

– and of course, you get to practice using your pinkies;

I hope you find the above information helpful.

Feel free to let us know what other information you would like to receive and we can cover it in our future posts.