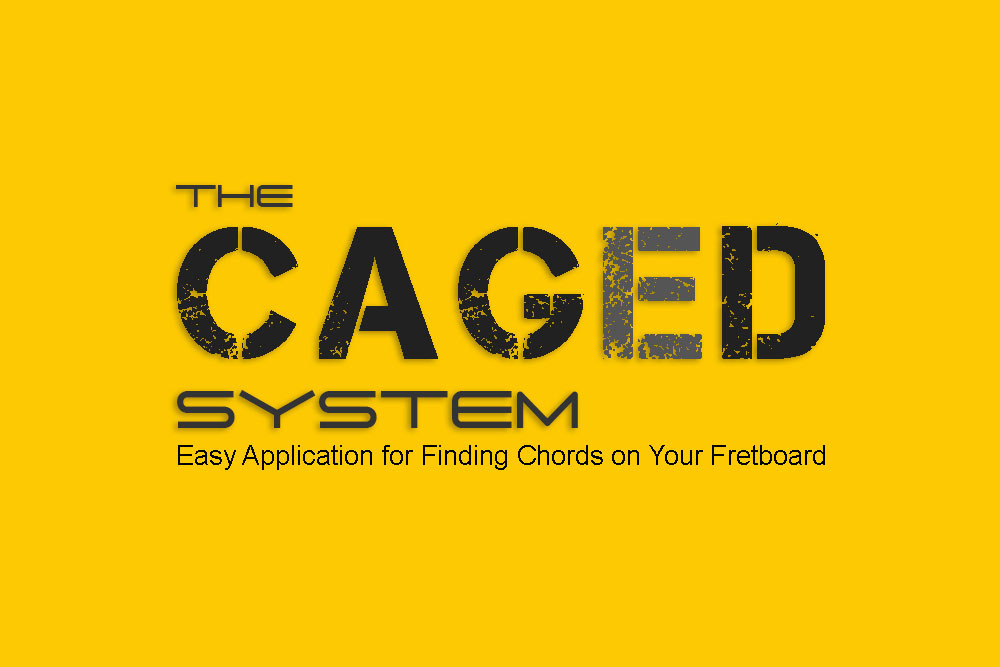 If you’ve been learning the guitar, you would have quickly realized by now that the notes on a fretboard are not something you can easily visualize like you can on a piano. Notes on the fretboard are spread out in a grid pattern, with notes of the same pitch appearing in multiple locations.

This is where the CAGED system comes in useful. It’s a versatile visualization method in which you can use to work out where things are on a fretboard. From chords, to scales, to arpeggios, using movable forms of 5 simple chords, C, A, G, E, and D. And hence the name CAGED.

In this article we shall take a look at the CAGED system and how it can help you as a beginner guitarist to understand some basic music theory, as well as having a better tool to visualize the fretboard with when recalling your notes.

How Does The CAGED System Work

To learn the CAGED system, you will first need to know the 5 basic open chord shapes of the major C, A, G, E, and D chord.

The second thing you should know about the CAGED system is, there is a difference between the chords themselves and their shapes. They’re interchangeable.

The next thing you need to know about the CAGED system is the letters themselves are also the sequence in which you move up and down the fretboard.

Finally, for each of the 5 shapes, there is a reference point associated with it.

How is the CAGED system useful for beginners

Even though the CAGED system has many useful applications in relation to playing the pentatonic scales, chord tones, and arpeggios, as a beginner you only need to focus on using the CAGED system to help you learn the fretboard as well as how chords can be easily formed without having to look at a chord chart.

By utilizing the CAGED shapes, you can easily work out where chords are on the fretboard.

In the beginning diagram, you saw how by moving the C major chord up the fretboard in order of the C, A, G, E, and D sequence, you were able to find the different positions in which you can play the C major chord.

Another way in which you can find chords using these shapes, is by using a shape that’s closer to the chord you want, and move that shape up based on the whole step and half step of the major scale formula.

For example, starting with the A major chord position in the A shape, you want to know what the B major chord is. In music theory, you learn that B is one whole step up from A. Therefore, by moving the A shape up 2 frets (a whole step) you’ll find your B major chord.

But there’s one little thing you need to be aware of when moving these shapes around. Whenever you’re moving away from the nut of the neck, you’ll need to replace that space with a barre, and hence the barre chord.

Now let’s look at another example using the chord E major in the E shape to illustrate the above further.

Say you want to find where the G major chord is, from the E major chord position in the E shape. Move the shape up 3 frets (E to F is a half step, and F to G is a whole step).

And now that you’re up 3 frets, remember to barre the 3rd fret with your index finger to replace where the nut used to be.

Now you might think, it’s cool to know that you can play a G major chord like this. But who does that?

Well, it’s true that you won’t really play a G major chord like that, but let’s take another look at what else you can do with this information.

So if you lift your finger from the B note (3rd string), you’ll change the B into a Bb, and thus turning this G major chord into a G minor chord.

In the beginning we mentioned that each of the shapes has a reference point, a root note.

Let’s say you want to find the A major chord within the 5th and 8th fret region. Start by looking out for the A note along the 4th, 5th, and 6th string of this region.

Now match these up with a shape that has a root note on these strings, you should find 3 matches. You have the G and E shapes on the 5th string, and the D shape on the 4th string.

And there you have it, 3 possible A major chord positions within the 5th and 8th fret region. With the E shape being the easiest to fret.

In conclusion, should beginners really learn the CAGED system? I would say yes to that for 2 reasons.

Firstly, as demonstrated above, the CAGED system can be a useful tool for beginners in terms of finding and practicing chord structures. This is also an effective way to practice barre chords which many shy away from in the beginning.

Secondly, as you improve, the CAGED system can be combined with the major and minor scales, pentatonic scales, and arpeggio. And the best part of all, the CAGED system is based on the simplest, basic chords of C, A, G, E, and D.

The CAGED system for guitar explained