The Ukulele is NOT a toy When you think of the Ukulele, the image of Hawaiian beaches, soft white sand and cool summer breeze brushing across your skin pops in your head.

That’s what makes the Ukulele so enchanting.

The name Ukulele is pronounced as (/ˌjuːkəˈleɪli/ YOO-kə-LAY-lee), or more commonly, (OO-koo-LEH-leh), according to Wikipedia. It is a musical instrument that has gained popularity across the globe, with its origins from Hawaii.

And no… the Ukulele is NOT a toy.

The origin of the Ukulele is said to have its influences from the Portuguese and their musical instruments such as the Machete and Cavaquinho.

It was then popularized by the Hawaiians, and as tourism in Hawaii took off, so did the popularity and the charming sound of the ukulele in the early 20th century.

The Ukulele has 4 strings, shaped like a baby guitar, and has 4 main sizes, in order from the smallest to the largest, Soprano (length 53cm), Concert (length 58cm), Tenor (66cm) and Baritone (length 74cm). The tuning and chords of the Ukulele, though different from the guitar, is easier to learn and play.

The chord structure are much simpler and due its smaller spacing between the frets and narrower neck, it’s also much easier to spread your fingers across the fretboard.

Hence making it an easy musical instrument to learn, for beginners and toddlers during their brain developing years.

The distinctive sound of an Ukulele is gentle and warm. To me, it’s almost like a harp where you really can’t go wrong no matter which string you strike.

However, there have been two main misconceptions towards the Ukulele, and I ‘m gonna to try to clear this up once and for all.

The first misconceptions being that an Ukulele is nothing but a toy.

Well, for one, the reason why the Ukulele has been mistaken for a toy probably has a lot to do with the cheap, low quality plastic ukuleles flooding the market after World War ll. 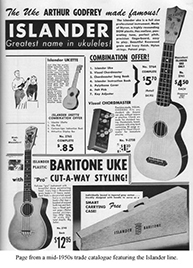 And with its small size, the Ukulele can easily be mistaken for a kid’s toy.

A side note (since we mentioned World War ll) …

Western music and its products were banned in Japan during World War ll. But many fans of the Ukulele continued their pursue of the instrument in secrecy and managed to bring it back to life after the war. And because of this perseverance, Japan has also earned the reputation of being the second home to Hawaiian musicians and fans around the world.

The second misconception is that ‘you just can’t play the Ukulele like a guitar’.

In a way this ain’t exactly wrong but…

The Ukulele is an instrument of its own, with its own unique qualities and fulfilling elements. Below are some examples of the different ways you can play the Ukulele.

Beginning with, of course, Israel Kamakawiwo'ole. One of the pioneers in Ukulele music and responsible for instilling that Hawaiian-theme like melody in our minds.

Here in the video is a soothing reinterpretation of the song ‘Somewhere over the rainbow’ by Israel, played with a Ukulele. Listen to that familiar “Ukulele” tone in his playing, and prove that…

The next video you’ll see is by James Hill, a famous Canadian Ukulele player who travels around the world to perform and share his passion for the instruments.

The way James Hill plays his Ukulele is quite different from Israel’s style. To me, James explores the different possibilities to how an Ukulele can be played. Check out his fun and engaging performance in the video and likewise, you’ll find that…

For my final video, Jake Shimabukuro, a professional Ukulele practitioner whose knowledge and skills with the instrument makes you wonder, if indeed it’s an Ukulele that he's playing?

Yes it is! As a matter of fact Jake’s playing a Tenor size Ukulele, which has a longer neck with a fret count of 19 frets.

In this video Jake performs the famous song “While My Guitar Gently Weeps’ by George Harrison (The Beatles – Lead Guitarist) using a Ukulele. What you’re about to hear is yet another totally different style of playing to that of Israel and James.

And with this video, I hope to convince you that the Ukulele can be as good, if not better, than a guitar.

The Ukulele most definitely is NOT a toy.